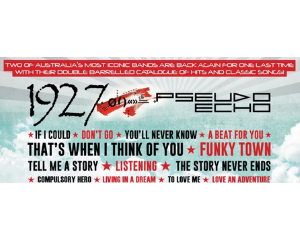 Don’t miss 1927 & Pseudo Echo as they team up for one final series of shows. Be sure to catch this unbeatable double bill as they perform their catalogue of hits. After two years of national touring, the bands are playing their last shows together.

These two bands have had a real impact on Australian music. They have a catalogue of songs that Australian fans grew up listening to. These songs are still played on the radio. The bands continue to accumulate new fans and gain awards along the way.

1927 formed in 1987. They have been reigning on the charts. Some of their most iconic songs include That’s When I Think Of You, If I Could, Compulsory Hero and Tell Me A Story – all of which were on the multi-platinum selling debut album ISH. ISH has won two ARIA awards, and it also became the highest selling debut release by an Australian artist. They continued to release music into the early 1990s before disbanding in 1993.

PSUEDO ECHO was one of the biggest names in music in the 1980s. Their influence has spread to a generation of Australian musicians. Their hit single are truly unforgettable. Their debut album Autumnal Park (released in 1984) featured hit singles Listening and A Beat For You, followed in 1985 with Love An Adventure and the singles Don’t Go, Love An Adventure, Living in a Dream and the massive #1 single Funky Town.

Be sure to catch these Australian music legends live!

Don’t miss 1927 & Pseudo Echo at Empire Theatre on November 18. Our Toowoomba Apartment Accommodation is just minutes away from Empire Theatre.